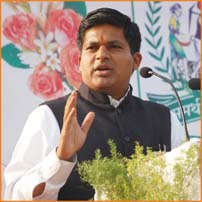 Honorable Aabasaheb is younger son of His Holiness Gurumauli. He is Head of Agriculture department (organic farming), Marriage Values (Vivah Sanskar), Sattvik Krushidan and Goshala. Under his guidance, Sevamarg organizes international agriculture expo (Convention) every year for Farmers as well as those dependent on the Agro-Industry. The convention focuses on conservation of biodiversity through organic or natural farming,to help reduce the effects of global warming and climate change, to reduce production costs, promotion and dissemination of indigenous and traditional seeds, indigenous cattle rearing, domestic fertilizers, manufacturing of medicines etc.
Hon. Aabasaheb runs a platform in the form of Satvik KrushiDhan for farmers for selling their naturally grown food thus encouraging chemical free foods for better national public health. Hon. Abasaheb designed and built Goshala with demonstration models to trains people on the scientific and spiritual way to nourish cattle, fodder management, by-products obtained from animals like panch gavya, cow dung, vermin compost, ghee, gomutra etc. Vivah Sanskar department under Guidance of Hon. Abasaheb, Shree Gurupeeth has conducted over one lakh community marriages of the poor and the rich alike where no dowry was exchanged for farmers’ families which suffered from Suicides, famine and debt.

Hon. Aabasaheb started full-fledged online matrimonial services for people of all castes and religions through Sevamarg’s website and App. Government and many other organizations have recognized the significant work of Hon. Aabasaheb in the field of Agriculture and its revolutionary positive impact on thousands of farmers. Below awards few awards for his contribution to humanity.

1) Organizer: Global Agriculture Festival (Krushi Mahotsav):
A festival where in the farmers are educated with vivid agricultural techniques in traditional, spiritual, modern and organic farming. The key objective of this Agricultural Festival is ‘making the farmers autonomous to earn back the interest and respect in society for the field of agriculture. Previous year the Global Agricultural Festival had included with exhibitions related to agriculture, livestock, rare herbs & health care etc. Along with all these Exhibitions, this year an Ancient Indian Agriculture Science Exhibition will add more value to this Event. Lacs of farmers are benefited from this annual event so far. These events have provided a platform for number of socio-agriculture institutions to reach out to the grassroots element of Indian Agriculture.