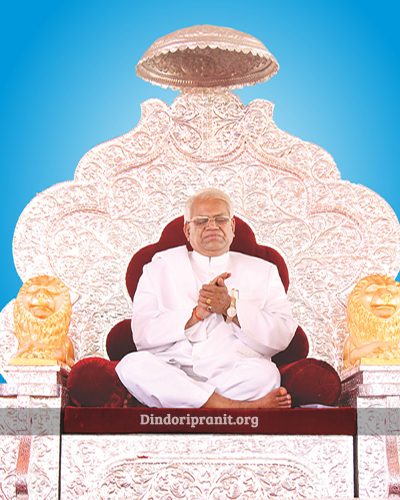 A Spiritual Guru, Social Reformer, Visionary and Inspiration to millions.

Early Life
Shri Shriram Khanderao More alias Annasaheb, also known as Gurumauli, born on March 20, 1955. From childhood, he was actively engaged in Sevamarg’s activities under guidance of Sadguru Moredada. After Sadguru moredada’s mahanirvan, His Holiness Gurumauli carried forward legacy
of Dindori affiliated Shree Swami Samarth Sevamarg. He laid foundation of Akhil Bharatiya Shree Swami Samarth Gurupeeth, Trimbakeshwar, a charitable trust to offer platform to world for healthy, happy and peaceful life. He has been engaged in grassroots social reforms for the past four decades across
India and now in various parts of the world.

Major Social Work
The social reforms that began with free of cost successful programs for de-addiction, women empowerment, no-dowry mass community marriages, agro empowerment, communal harmony, self-employment for the youth, and so on, from village Dindori, have now penetrated across globe through the trust’s thousands of social services centers. He has been executing Social Reform Programme (SRP) from, a Socio University, Shree Swami Samarth Gurupeeth, Trimbakeshwar that conducts practical workshops, study tours, seminars and training for one and all, free of cost, across the globe. The aim is to raise new generations, proud of culture and with a scientific bent of mind and confident to face the future.

The counselling sessions are across more than 5000 centers of Seva Marg across global take into consideration the social, educational and ancestral background of the troubled and unhappy solution seeker and suggests him or her simple easy-to-do self- help techniques. All the activities are carried out on a daily basis through these centers absolutely free of cost by millions of dedicated and selfless voluntary activists who have similarly benefitted from it and now want to pass the benefit down the chain to the lowest strata of the society without distinctions of caste, creed or religion.

For the past 40 years, he has been striving to better the lives of the last of the lowest in the social strata, empowering them with knowledge and training, making them self- reliant and, in the process, carving out a strong village and agrarian economy that exists through the united colors of communal peace and harmony. Also, an exclusive team of trained volunteers conducts Balsanskar (Value Education) and Yuvasanskar (Youth Empowerment) sessions in the Schools and Colleges so as to spread awareness on rich heritage amongst the youth to build incredible future and also provides guidance on Environment conservation. The result of this education and training is, thousands of people have rid themselves of alcohol and abuse, got good jobs or are happily, self-employed, women are running small and medium-size businesses, farmers are using the traditional as well as modern techniques and tools of agriculture resulting in more yield. Many volunteers are working towards blood donation camps, cloth donation camps, gender equality campaigns, social engineering through mass marriages, and rehabilitation program for drought affected farmers and so on. Today, the personal counselling continues through all the centers of sevamarg.

As an extension of its social revolution drive, a small step has been taken, in decades to come, shall perhaps prove to be giant leap in history of mankind. The multi- specialty Sadguru Moredada charitable hospital has started to build and mark a new beginning in health and happiness for one and all. The reason why the barren lives of millions of rural folk in the interiors of Maharashtra and elsewhere are today blooming with happiness is the 18 – Point Social Reform Programme (SRP) that has been carrying out for the past four decades, holding mass meetings of farmers, womenfolk, jobless youngsters, tribal, deprived and under privileged people and guiding them with knowledge and training. Most recently, Tree Plantation in millions was done by youth who are the part of the Balsanskar and Yuva Probodhan wing of Seva Marg.

Recognitions
Several organizations have taken note of this selfless silent social revolution and honored with awards and citations.

‘Bharat Seva Ratna’award for eceptional work in the field of Value Education (Balsanskar) across India by Indian Institute of Education Management in 2019.

‘Vijay Ratna Gold Medal’award for remarkable social work by India by Indian Institute of Education in 2019.

Maharashtra Government also honored with ‘Krushi Bhushan award’ in 2014 for the outstanding work for farmers.

Zilha Parishad, Nasik also conferred him an award on the occasion of Rajiv Gandhi Akshay Urja Din – 2007 for the distinguished work in the area of Non-Conventional Energy.

The special Award conferred by Maharashtra Government for Blood Donation Camp, in 2006 during the Kargil War, thousands of volunteers had donated blood for the national cause from camps organized by him.

Collector and District Magistrate, Nasik commended and conferred Letter of appreciation for the efforts during water scarcity management program. He also awarded with ‘Malhari Ratna’ by Jejuri Sansthan to praise His round the clock admirable work towards common man and so on.

The Publications Division of Gurupeeth brings out over 70 books in Marathi, Hindi, Gujarati, Kannada, Telugu, Bengali, Sanskrit, English and other languages. Among them is a series on agriculture know-how called Agriculture (Part1-4), a monthly magazine called Shree Swami Samarth Seva and another on personal development called Dnyandan (Part1-4) and many more.

Today, Sevamarg is operating through over 5000 centers across India and spread across many other countries like USA, UK, Dubai, Nepal, Australia etc.
Millions of people across the globe living health, happy and peaceful lives with blessing of His Holiness Gurumauli. His work has touched the lives of millions of people around the world, going beyond the barriers of race, nationality and religion.