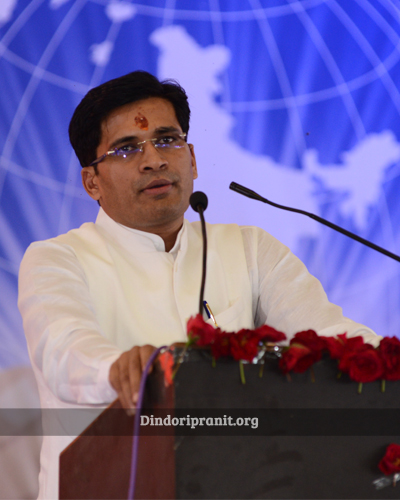 Hon. Nitin Bhau is a Philosopher, Spiritual Guide, Counselor, Academic Educator, Printer, Publisher, Social Reformer and a Visionary of the new modern Era. He is son of His Holiness Gurumauli and principal disciple. Hon. Nitin Bhau is a Civil Engineer and is the Head of the Publications Department of Akhil Bharatiya Shree Swami Samarth Gurupeeth, Trimbakeshwar, a charitable trust that has been engaged in grassroots social refor ms for the past Six Decades.

The social reforms that began under the guidance of Sadguru Moredada and His Holiness Gurumauli are getting expanded to new modern dimensions with the direction from Hon. Nitin Bhau. Hon. Nitin Bhau is instrumental in transforming generations through value
based education to youth and to children through Balsanskar (to imbibe divine qualities to  become an Ideal human). The printing setup done at Shree Gurupeeth is a state of art with  many new modern techniques implemented. Several scholars from printing arena are visiting to learn it. Hon. Nitin Bhau is also a pioneer in establishing an IT cell and ‘Desh Videsh Vibhag’ of Gurupeeth.

All the activities that are carried by Sevekaris are absolutely free of cost by lakhs of dedicated and selfless voluntary activists who have similarly benefitted from it and now want to pass the benefit down the chain to the lowest strata of the society without distinctions of caste, creed or religion. The result of this education and training is: Several lakhs of people have rid themselves from alcohol and abuse, youths got good jobs or are happily self-employed, children are growing with rich moral values, women are running small and medium-size businesses and farmers are using the traditional as well as modern techniques and tools of agriculture resulting in more yields. Many volunteers are working towards blood donation camps, clothes donation camps, gender equality campaigns, social engineering through mass marriages and so on. Today, the personal counseling continues through thousands of centers in and outside India and the Publications Division of Gurupeeth brings out over 70 books in Marathi, Hindi, Gujarati, Kannada, Telugu, Bengali, Sanskrit, English and other languages as well as in Braille method under the guidance of Hon. Nitinbhau. The knowledge treasure also has a four-part series on agriculture know-how called Agriculture (Part 1-4) and another on personal development called Dnyandan (Part 1-4) and a monthly magazine called Shree Swami Samarth Seva. Shree Swami Samarth Seva Quarterly Magazines are published in Hindi, English, Kannada and Gujarati languages. Balsanskar, Ayurveda Shastra, Science of Festivals, GarbhSanskar and VivahSanskar are few of the gems of the research that are relevant to lifestyle of today.
Hon. Nitin Bhau is a true youth icon for thousands of young volunteers serving selflessly through SevaMarg. He is also guiding the research team that examines results of spirituality with the help of science, e.g., results of various Sanskars on and beforethe fetus formation, effect of chanting various mantras, outcome of Meditation on human body & mind and many more. This research team is actively involved to bring science and spirituality together for the benefit of mankind and is involved in research on Vedas and Upanishad’s and its relevance to today’s context.

Several organizations have taken a note of this selfless silent social revolution of Shree Gurupeeth and Hon. Nitin Bhau. Many printing exhibitions and conferences have invited Hon. Nitin Bhau to impart his knowledge. Recently, Bruhan Maharashtra Mandal (BMM, USA) has also invited Hon. Nitin Bhau to guide the audience on the subject of Balsanskar. The BMMconference is scheduled in July 2017 at Detroit (Michigan, USA). The reason why the barren lives of millions of folks in the interiors of India and elsewhere are blooming with happiness today, is the Social Reform Programme that Shree Gurupeeth and Hon. Nitin Bhau have been carrying out for more than a decade, holding mass meetings of parents and teachers, womenfolk, jobless youngsters, tribals (adivasi), deprived & under privileged people and guiding them with knowledge and training to name a few.