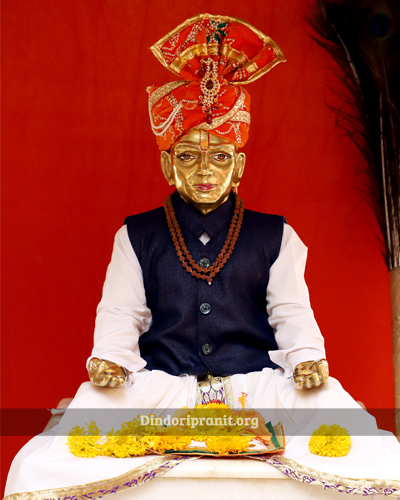 Sadguru Pithale Maharaj undertook severe penance (Tapasya) in the Himalayas for 12 years and for another 36 years at shree kshetra Trimbakeshwar, one of the 12 Jyotirlingams situated on the banks of river Godavari in Nasik, Maharashtra.

He stayed in Nasik for 22 years and removed people’s sufferings through spiritual counseling. Bhagvan Shree Swami Samarth Maharaj had conveyed to His chosen disciple-Sadguru Narayandasji Pithale Maharaj that His role will be to guide people, society, nation & the entire world through a yet-undiscovered ardent devotee of Bhagvan Shriram, Sadguru Khanderao Appaji Moredada of village Dindori in Nasik district.

In 1974, Pithle Maharaj left his physical body and As directed by Sadguru Pithle Maharaj, Sadguru Moredada raised the Dindori Darbar at His farm in Dindori, thus began the journey of empowering and healing a million mind, body and souls through simple, self-help tools that went on the alter their destinies in a short span of time.